Arctic Fire & the Lyre of Lejre


Last Summer I had the fine opportunity to participate in the semi-annual Arctic Fire of 2016. It's a gathering of international artists & smiths orchestrated by Dave Stephens & Shane Harvey in Alaska, including additional luminaries such as Jake Powning, Petr Florianek, Peter Johnsson, Owen Bush and previously, Michael Pikula and David DelaGardelle.

In the past it has been primarily focused on bladesmithing and related ornamental techniques. The first one was simply live-streamed lectures, demos and interviews. In the following endeavor we filmed and live-streamed a blade being made from iron ore to gem-setting, and offered it up as a mythic mystery puzzle. For 2016 we created an elegant back-story, or should I say, Peter mostly created an elegant back-story, and we all made objects that could have been. That is, could have been found in the archeological excavations of Lejre, Denmark, home of Heorot, where Beowulf dove down and defeated the monster Grendel, more than a thousand years ago.

I decided to make a lyre, because the poem Beowulf specifically mentions that the ever complex Grendel absolutely hated the sound of joy in the hall, and of the harp being struck; it was torture to his ears. I wanted to imagine that when he came to Heorot and slew many men, that he took this object of jealousy and hatred back into his underwater cave. There he longingly contemplated it, filled with the denied desire to share in its joy, perhaps even to awkwardly strum it before smashing it in a rage of alienation.

As an object it's a wonderful symbol of the best of the world of men in the Beowulfian Age. It also offered opportunities for some metalwork- lost wax casting in bronze and gold plating. The objects themselves presented fantastic narrative potential for our back-story of Victorian archeology, long lost collections and misattributed discoveries: a set of lyre escutcheons discovered to match a sea apart, and an obscure drawing with a matching bridge and some very suspicious, and uncomfortably large dentition marks in evidence. 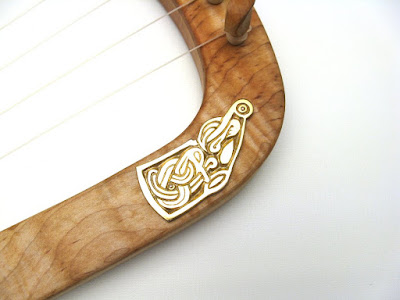 There are a number of lyres and lyre parts in existence, as well as some images- in wood and in stone. I took inspiration from all of them, and tried to create something that possibly could have been, but most definitively should have been.  The shape is taken from the Cologne Lyre, found in a churchyard burial, as well as from some Gotlandic depictions. The escutcheons on the arms and the bridge inspired by pieces in the British Museum, and the soundboard holes by the Trossingen Lyre.

I'm not finished with the story.  And neither are my compatriots in troll-telling. There are some other drawings we have uncovered, and one of them shows a drinking horn with dentition marks that match those depicted in Gotthard's original rendering. And that is to say nothing of the catalogued box and the human humerus... which appears to have the very same marks. And the Lyre of Lejre has yet some songs to sing.

It has a fine sound, one that would undoubtedly fill Grendel with covetous malice. If you missed our livestreamed presentations this Summer, you will be able to hear it when Arctic Fire finishes editing and compiling our presentations for a soon to be released download / DVD. Follow us on Facebook or see some teasers on the Arctic Fire website, and come along with us, down the rabbit hole, and to Grendel's Hoard.